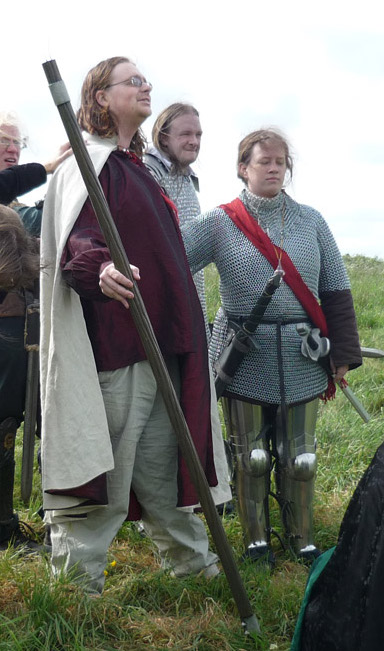 Panama - whose full name isn't generally known - is an amnesiac, he can remember nothing of his life before New Years Day 1288 when he woke up in a field with his brains scrambled by means neither spiritual or magical. Obviously, he ended up in the Wessex Arms (Entered History/YearThreeInteractiveNine). He could speak, but all the words he spoke came out in the wrong order. He became a mage of fire, and learnt to set light to things in many interesting ways, and also that games and concentration could make him regain his ability to speak for short amounts of time, at the cost of a massive migraine for a while afterwards. He struck a deal with the Fae via Flaviar (History/YearFourInteractiveFour)) to give him his mind back if he helped. [Panama's Letter]

Panama returned (History/YearFourInteractiveNineteen), with out of date information that didn't help about the location of Edgar, and shortly afterwards went back out to "see more of reality" and look for his past.

He hasn't yet mentioned what he found, but returned to the bar eventually (History/YearFiveInteractiveSix) just in time to volunteer to do a ritual to help save the world (History/YearFivePreBanquetBash) during which he (and Bluebottle/Mary) got captured after falling unconscious on the field of battle in the plane of Darkness after a victory by the Demon Lord Arioch, summoned by a person he was attempting to give a chance beyond his prejustices. (/Panama Kidnapped)

You may assume Panama has learnt that lesson well, should he return.

A search party was sent to rescue them both (History/YearFiveLinearEight), which appears to have cost the lives of Kentar (who he didn't know), Sir George (who he didn't like) and Tebah (Who he both liked and respected), and Rupert, who he considered arrogant but not worth his (Panama's) life. He didn't see the death of Kentar, and there was nothing left of Rupert, but to Sir George's corpse he said "You were the most honourable person I've ever known", and to Tebah "I'm truly sorry for what I'm about to do".

He was possessed, obviously, by an Endingbrood. In an attempt to hide this for as long as possible, he made a deal to disguise his spirit call (History/YearFiveInteractiveFifteen) and trusted three people with the knowledge of what he was doing (History/YearFiveInteractiveFourteen), which was attempting to use his connection with the Endingbrood as a double-agent status, able to help the defence of the city with a man on the inside. Unfortunately, this didn't stop (some of) the Johnites of the bar taking matters into their own hands and - for the second fortnight running - knocking him unconcious to perform a rite. This time purging the demon from him (History/YearFiveInteractiveSeventeen). His attempt to divert - or at least postpone - the war over (For the moment) he attempts to stop the Bar Adventurers from doing any action without first having all the possible information, and attempt to find some people who can be trusted with sensitive information without stabbing him in the back, or at least causing him to be knocked unconscious again. Concentrating on his studies for a bit, Panama returned to the bar in time to convince groups of peasants not to attempt to kill Edgar for threatening the safety of the world. This worked for one lot, and set the other lot after him instead (History/YearFiveInteractiveTwenty), Panama counts this as a qualified success. He is currently quite worried about people's tendency to go look for people to beat up rather than think things through first. This has been tempered by an evening wandering the entire city looking into rumours of Morvanites raising undead, which eventually was a complete waste of his limited relaxation time (History/YearFiveInteractiveTwentyOne).

Finally, after the end of an eventful few months, Panama took advantage of Crimson's offer to return to the lands of the fae for a little while. It's quieter there, and the games are better. Toast has gone with him too. This time he thought ahead, at least a little, and[left a note] (pdf) ([PNG version, if that doesn't work])

Panama has returned to an appropriate reality. He spent an entertaining summer playing games against the Fae, occasionally looking out into the world from Arcadia when there was a larger than normal explosion. He returned to find that the rats had got bigger, his room was still unoccupied, and someone had broken Teutonia and - apparently co-incidentally - the ritual circle. Having promised some Air Elementals that he would help fix it, he used a matrix they gave him to build a new spell ("Panama's Matrix Realignment (ALTER DETECT MAGIC)") to attempt to remap a shattered magical matrix into its original form. In casting this for the first time, it produced a manifestation of a self-aware taint that was lurking in the ritual circle, which almost killed him. The second time he got a lot of people to stand around being defendy while three people cast it. This time he only got knocked out. In addition, Crimson of the Fae got the chance to try his new toy on the magical thingy, which wasn't very successful. Some other people then fixed other ritual circles. Around this time he got promoted to Journeyman too.

Following this, Panama wandered away to check the ritual lines to make sure everything was back to normal, and with a heavy sense that he had been a responsible adult far too often recently, so he found a use for one of his new toys.

Panama then began to run the campaign to get Crimson elected mayor of Grantabrugge.

Shortly after the start of the campaign, Panama was kidnapped by some fae of secrecy. His location and the reason why were kept a Secret, which made rescuing him slightly complicated. Nevertheless, Miriam and a band of intrepid adventurers sallied forth into Arcadia and rescued him, this time without managing to wipe out most of the higher level characters in the system (History/YearSixLinearFourteen). He ended the year as Sordan came into the bar, to whom he was respectfully sarcastic. Sordan likes him, which is weighing on his mind a little.

Panama spent the summer cloistered with his research, catching up on six months absence, and following up an interesting lead on the events of 1287.

A new term, a new start. Panama wandered in to discover that the city was now sentient, the oni were onnoying again, and that the collage wished him to take on an Apprentice and to be the official representative for a visiting delegation from Kernow. Then he went to Londonium to attempt to give flowers to the city, on behalf of this city.

That didn't work, after recovering from the sweetly smelling charred remains of the ritual, he returned a few weeks later to meet the delegation, who told him something he didn't know, and for his cat to be injured.

I'd like to be able to clear it first for standard stuff, Don't even ask for NSFW.